Are you setting the table for a big feast today? You might be getting ready to celebrate Thanksgiving, Hanukkah or both (Thanksgivukkah?), and that means after a day of cooking, greeting relatives and trying not to spoil your supper, you’ve got one thing on your mind: food.

Food is on our minds, too, and it’s not just because of the holiday season (although that certainly has our stomach growling in anticipation). Last week, culinary queen Martha Stewart’s food pics went viral, and not for the right reasons. Her shots are unsavory to say the least--a far cry from the perfectly presented dishes we typically associate with her brand. We love Martha, but posting pictures like these is most definitely a bad thing.

So where did Martha go wrong? Her strategy of sharing personal pics of food isn’t a bad one. In fact, from celebrities to the average consumer, sharing pictures of food online is a persistent trend in social media. Scroll through your newsfeed on any given day and you’re bound to catch a glimpse of a fancy home-cooked dinner spread, last Sunday’s epic brunch or a pastry so delectable it has to be seen to be believed. 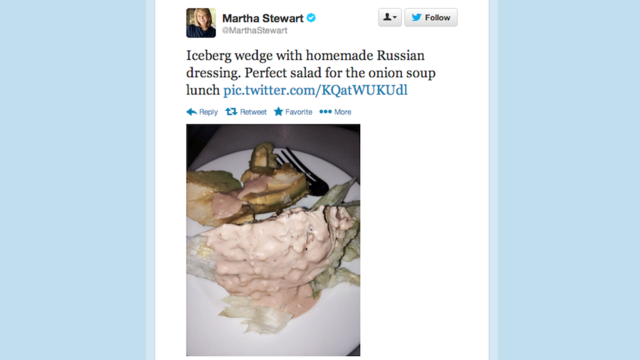 From a marketing perspective, getting social with food can be a great idea. For food-related businesses that haven’t shied away from using the web to grow their brand, social media has been a tremendous boon. Just look at the way tech-savvy food trucks have flourished with the help of social tools. Food pics have become such an integral part of a business’s online presence that Yelp has even created visual menus based on user submissions.

Martha’s issue is really a matter of execution. The impulse to share food pics is great, but for a big brand that’s synonymous with lifestyle, good eating and perfecting homemade meals, the visual content has to be up to snuff. While the images she shared from her personal Twitter account provide some insight into her personal life, they’re also disconnected from the rest of her brand. That’s the kind of dissonance that fans and followers will readily point out on social media because, let’s face it, it’s kind of funny. People love to take down celebrities, especially if a big part of their persona is built around an image of staunch perfectionism.

What else can we learn from Martha’s mishap? The interest around her food pics reveals how far a consumer’s impressions of a brand can extend into the realm of social media. Why did so many people balk at her tweets? They’re expecting the same kind of content that they see on television or in cookbooks. Martha’s case also shows that when a person is their brand, as is the case with Martha Stewart, a personal Twitter feed reads as officially as anything else her company might produce.

What would you do differently if you were in Martha’s shoes? Is this a case of curating content more wisely? Or taking the time to explore what goes into creating great food photography through mobile devices? Share your ideas in the comments below.