For those of you who have time to write your own Facebook posts and Twitter tweets, here's a helpful guide based on what we tell our own writers. 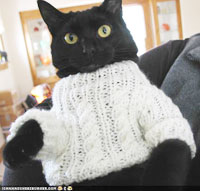 Have you discovered tactics that work well? Share them below!